Pong was based on a game called ‘Tennis for Two’ which was a simulation of a http://partsprospector.com of tennis on an oscilloscope. Physicist William Higinbotham, the designer, goes down in history as creating one of the first electronic games to use a graphical display.

The game is intended to represent a game of Tennis or Table Tennis (Ping Pong). Each player has a bat; the bat can be moved vertically. The screen has two horizontal lines on the top and bottom of the screen. A ball is ‘served’ and moves towards one player – that player must move the bat so that the ball hits it. The ball rebounds and moves back the other way. Depending on where the ball hits the bat, the ball will move in different directions – should it hit one of the top or bottom lines, then it will bounce off. The idea is simply to make the other player miss the ball – thus scoring a point.

while it sounds utterly boring, the game play is actually very addictive. It is easy to play but very difficult to master, especially with faster ball speeds, and more acute angles of ‘bounce’.

for me this is the father of video games. Without Pong you probably wouldn’t have video games – it started the craze that would continue grow and become a multi-billion dollar industry. I will always remember this game!

this game was developed by Konami in 1981, and was the first game to introduce me to Sega. At the time it was very novel and introduced a new style of game.

Easy – you want to walk from one side of the road to the other. Wait a minute – there’s a lot of traffic; I better dodge the traffic. Phew Made it – hang on, who put that river there. Better jump on those turtles and logs and get to the other side – hang on that’s a crocodile! AHHH! It sounds easy – the cars and logs are in horizontal rows, and the direction they move, the number of logs and cars, and the speed can vary. You have to move you frog up, down left and right, avoiding the cars, jumping on logs and avoiding nasty creatures and get home – do this several times and you move to the next level.

Yet another simple concept that is amazingly addictive. This game relies on timing; you find yourself dinking in and out of traffic, and sometimes going nowhere. The graphics are poor, the sound is terrible, but the adrenalin really pumps as you try to avoid that very fast car, or the snake that is hunting you down!

I love this game for many reasons. I played it for a long time, but never really became an expert – however, it was the first ever game I managed to reproduce using Basic on my ZX81 – I even sold about 50 copies in Germany!

There are many methods that people can use to make quick money. Gambling has been known for years to be a reliable option for people who love… 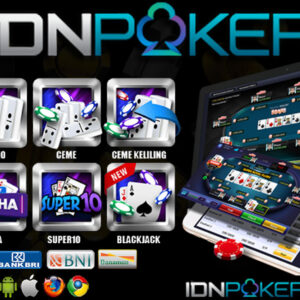 The Usage Of Poker Aides Online – A Double Edged Sword

An online type of poker training is the IDN Poker aides. These aides help you to get better in the online poker games. With the help of…